You are here: Home / Do Work You Love / Executive Coaching: The Drive to Compete

The drive to compete is strong within each of us. Here are some executive coaching observations on where that desire comes from and how to manage it… 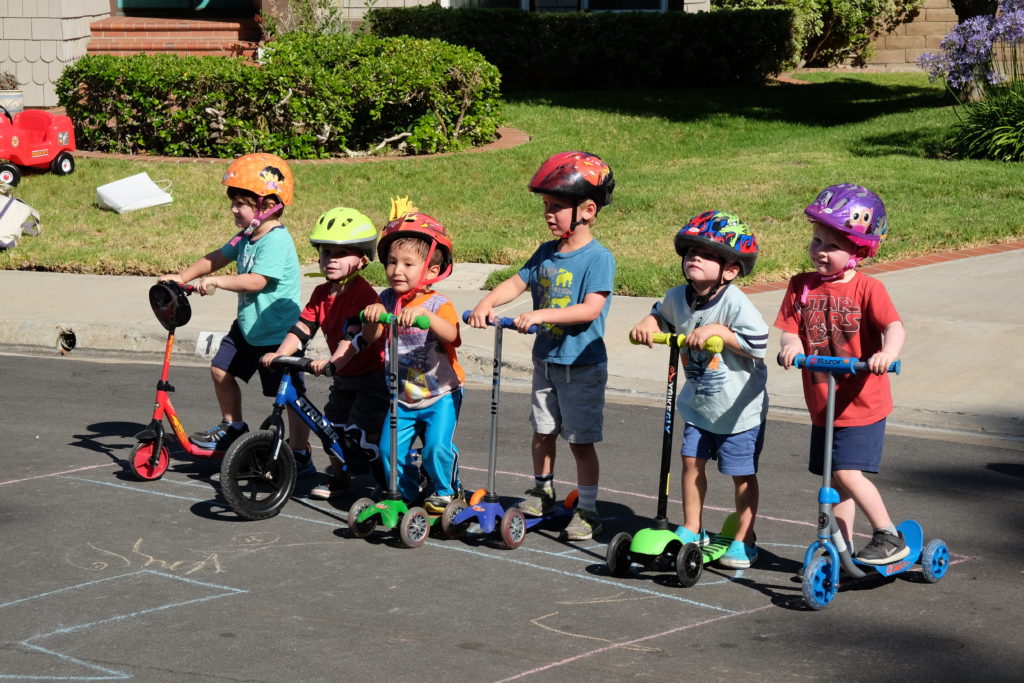 Many of us can identify with being competitive, driven individuals. However, I hadn’t really thought much about whether this is genetic or environmental until this past weekend.

This weekend was my son’s 4th birthday party. He had specifically requested a “racing” party and only invited a few of his male friends who he likes to race with.

Now in preschool he likes to race tricycles with his classmates, but in the case of the party we set up a racetrack where he and his friends could race scooters. Scooters seem to be the transportation of choice in his age group because they are easy to ride and quite fast.

The racetrack we drew was a simple, chalk drawn stretch on the street in front of our house.

To say there is a drive to win among these 4 year old boys is an understatement. We had plenty of false starts, kids cutting each other off to finish first and a fair amount of gloating over winning races.

(When you could even tell who won among the mayhem of kids.)

What was surprising to me about this was not just the amount of drive to win, but the degree. These kids were serious.

Even more surprising was the fact that my 2 1/2 year old nephew (who is a natural athlete) wanted to race with the 4 year olds… and frequently won. He pushed to the front row at the starts, was as likely to start early as anyone else, and showed tremendous intensity.

All of which got me to thinking that what I was seeing wasn’t something environmental, but in fact a competitive drive that exists in the very nature of what it is to be human (or at least male)…

The Drive to Compete is in Our Nature

I couldn’t help but think that if this had been thousands of years ago, the behavior of these boys might have signaled early competition for dominant roles in their tribe…

I share this story because it brings to mind a conflict that I frequently see clients struggle with; particularly male clients.

The struggle is that they usually know that money can’t buy them happiness (and if they don’t know this, I share research with them that helps explain it), and yet they are deeply driven to acquire wealth. (See How to be happier than a billionaire and 7 Signs it might be time to quit your job).

The core desires to Acquire, Defend, Relate and Learn (see How to evaluate a job offer) are deeply ingrained. Further, we know from the research that social relativity is important (i.e. we feel good when we are doing better than our peers).

So, more money won’t make you happier, but making more than your peers will…. It appears to be a conflict.

The Drive to Acquire Wealth

The explanation of the conflict is that we tend to adapt to the amount we make (i.e. if we get a raise it becomes our new normal), and as we make more money we tend to change neighborhoods and social groups, thus our reference group tends to change and we are no longer relatively wealthier.

Thus wealth doesn’t strongly correlate with happiness after a certain income (around $70k/year).

But no matter what we make, we still have a drive to earn more, most likely because that is the currency of the day in terms of determining status in our society.

So what is the lesson here? Personally, I don’t believe it is to give up ambitions for wealth and prosperity. These are important ambitions to who we are and help us to grow and develop as individuals.

However, I do believe that those professional desires to acquire need to be tempered with focusing on the mental, physical and relational elements of our lives (see Executive Coaching: Having it all).

The people who are happiest and most productive focus on all four of these areas in their lives. Those who simply focus on one or two of them tend to miss out on a big opportunity for increased happiness (and wealth).

So remember to invest time in each of those areas very consciously and deliberately (shoot me a note if you are not sure how).

If you have questions about executive coaching in San Diego and beyond, please let me know.

How do you set up team goals for your … END_OF_DOCUMENT_TOKEN_TO_BE_REPLACED

You may have days when you absolutely love your … END_OF_DOCUMENT_TOKEN_TO_BE_REPLACED

We need to be thoughtful about how we invest our … END_OF_DOCUMENT_TOKEN_TO_BE_REPLACED